Today is Wednesday November 20, 2013. The fifteenth time that Transgender Remembrance Day is held. ?The eighth edition in the Netherlands. Here it was started by then Queer Collective “The Noodles”, later on by Transgender Network Netherlands. This is the second local edition, done by United Trans Activists for Change. Coming Saturday a national ceremony will be held in Nijmegen.

I am Vreer, a long time trans & genderqueer community organizer here in Amsterdam and I am also speaking as a Steering Committee member for Transgender Europe. ?Today has been organized by some six people: Tara and Thijs, Anne, Rebeca, Marten, Abigail. ?Trutfonds made it financially possible to hold this Commemoration. Thanks, folks.

Since 2008 the number of victims of transphobic murders worldwide is counted. The Transgender Europe project called “Transrespect versus Transphobia” gathers all these data with the help of local and regional groups that get capacitated to do so.
From the start of the counting we know of 1,374 murders in countries all over the world. This is until November. New murder reports have come in. We also know this number of 1,374 of whom 238 have been killed this year, is only the tip of the iceberg. This month alone already new murders have been reported.

There is no country in the world that really, concretely respects trans people as the human beings we are. In the Netherlands we only had two killings – that we know of:
In July 2005 Irene Thumassangh got murdered at home in Amsterdam, by her ex-colleague who got convicted.
April 2007 Harry/Henriëtte Wiersinga got attacked on Spui in The Hague and zie died shortly after in the hospital of his/her injuries. The attacker got acquitted.

Many times the most cruel and atrocious killings befall us. Us as gender variant people, because this is not only about trans* and in that sense it is very fitting to be at the Homomonument.

It happened to Brandon Teena, from Humboldt Nebraska, who is one of the few trans men among the victims. This year 20 years ago. We don’t forget you Brandon.

It happened to Dwayne Jones in Montego Bay, Jamaica. She/he got bullied already in school his/her father helped  in that. At sixteen years old, this July, the teenager was dead and beaten, stabbed, shot and run over by a car when he/she showed up at a street party dressed as a woman. Her/his mistake: confiding to a friend that he/she was attending a “straight” party as a girl for the first time in her/his life. This October an angry mob attacked and fire bombed the house where Dwayne lived with three friends. Chilling deeds. 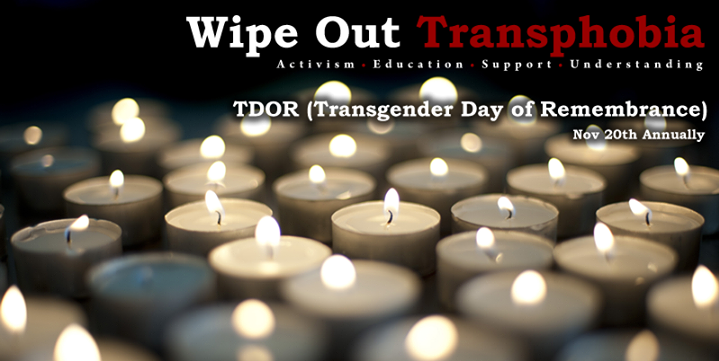 When asked for LGBTI news Turkey about the death of Dora, one of the women murdered this year, who died in Ku?adas?, Demet Yanarda? of Black Pink Triangle in Izmir says:?“Every year a few of my friends get killed. Of course it hurts me whenever someone dies but when it is someone I have memories with, it affects me so much more. I think of the question, “when will my friends hear about my death?” Saying this is extremely painful but I do not know even one transsexual who died of natural causes. Just because you are not murdered this year does not mean that you will not be murdered the next.“

The most urgent demands trans* people make are:
Safety, protection from the permanent threat of hate crimes and abuse by state and non-state perpetrators

We are many. But many cannot or dare not come out, transition, out of fear for their environment. Their families, their friends, their jobs. This is the problem many cross dressers face.

Psycho-social support is the most important care issue, for all age groups: Help to get comfortable with yourself when pressure gets too high. ?And this applies very strongly already for trans* kids. And for genderqueer kids, for those who behave gender non-conform. They need the right, the possibility to live fully in the gender they feel to be theirs, in school and wherever. Many children know already very young they are Different with a capital D. If they cannot appear safely, we will have to invest doubly in the already needed increase in psychological assistance.??Now trans people commit ten times as often suicide attempts as the non-LGBT population; have four times less a job, are more often poor and with a high education at the same time.

Where several countries engage in a race to the bottom on rights, a couple of others are fighting to be the number 1. To give trans people Access to All Areas, instead of a permanent Access Denied that we see so often.

Sometimes it gets better. The Netherlands will get better legislation for trans people. ?Apart from a regional law in the South of Spain, initiatives are taken in Ireland, where a members bill would apply the famous Argentinian law. ?Malta is doing the same with a big chance of success. Albania desperately wants to enter the EU and is working on a similar law.
No place is yet designed for people with a nonbinary gender identity (such as genderqueer, agender, bigender) , but in the meantime: just by our being there and by our changing genders, we can fuck up the binary very neatly.

I hope we can gather here next year with a shorter list of names and at least the first European non pathologizing legislation. We hope and fight that soon the world will be a better place for all of us “deviant” people. After all:

All the freaky people make the beauty of the world.