We are gender pirates , drawn to the furthest edges of uncharted waters, testing our courage and convictions over and over, inventing ourselves through sheer force of will. We capsize conventions and take no prisoners.

To boldly go where no vreer has gone before.
On my continuing mission to seek out new identities
and hitherto unknown gender expressions.
(thanks Jim!)

And what constitutes a vreer?

In my opinion the best equivalent to my (dutch) word “vreer” (pronounced as ‘vreir’) is the epithet “gender blender”. A “mermixter“, a mixture.
I am not your average gender blender, I’m a particular kind of gender blender. Nor is every trans* person a vreer. As not every trans* person is a gender b(l)ender. A vreer however is someone living (voluntarily) in between and beyond the acknowledged sexes of our western society.

So it does not mean an ordinary trans* person, but more a gender traveler. In my case it means a vreer is a kind of transexual, former man, former woman, grown into something else entirely, somewhere beyond the ultimate frontier of gender. Essentially however, there is no essence to me. I am me and how to call this ‘me’ is subject to change. 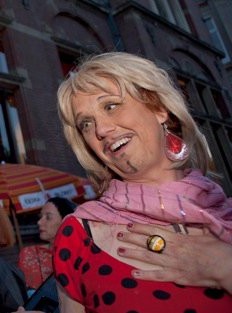 in drag at the opening of Transcreen1 at the Balie, Amsteram, 2011

I’m the only transgendered vreer on the net (hah!). Others are just the product of hazard. Thanks to the Internet Eye you can find forums I’m on, you can even find the music I listen to. A great deal of my online network can be traced, gone is my privacy!

From time to time I associate as a (positive) multiple personality. Being me means acting like a “man” sometimes and at other times more like a “woman”. At other times I am just a contiguous (alas not contagious) conglomerate of genders.
Although performativity is not performance, and the gender performance one lives is learnt at young age and re-enacted constantly, I see and feel there is space to change the scenery and the script you are to perform. So I call myself also a gender multiple or multiple gender. A friend of mine is inspired by 7 of 9 and calls herself Seven. I feel more like 1 through 9. I am a collective. Of genders. And preferably of sexes. But these two are intertwined anyway. Or to quote Kate Bornstein: “Sex is about fucking, the rest is gender”

Interested how I got that way? Buy  Kate Bornstein’s  “Gender Workbook. It taught me a lot. Although to her book ‘s ratings I already was a gender freak already before having taken the “course”. Here you can take the test yourself.

I also recognize aspects of my feelings on gender in the work of Judith Butler. I think, I feel, that bodies do matter, for they are material, but they are also text. Bodies are textualized matter and materialized text (Saint John already said so in his gospel).
In short Butler’s point is that gender, as everything, is learned by imitation since our earliest days. From the moment you recognize that, you have opportunities to change your gender to what suits you. It helped me to find my way out of gender as we know it. To me gender isn’t that important. I don’t care if you sir or madam me; though you best call me mixter. And read Foucault. That helps.

I am trying to do more with the human rights interests of queer work: following the situation of LBGT-people in the front-line that now lies in former Soviet republics located in the Caucasus and in Eastern Europe.Another important topic is the “christening” of the world in a deeply LGBTI and women hating discourse, as done by the coalition of powerful religious nutcases from the far West and the East , which I follow closely. Together with my active interest in Latin America and general interest and knowledge on human rights I hope to be able and find a job in human rights related stuff.
With Radio Noodles and Radio Queeristan I have made  monthly radio shows on themes that are interesting to the Dutch queer population.

Life and other stuff that happens

I still watch Chile and Patagonia, where I have been twice. I check how life is for genderqueers like me and my friends. I already wrote some details on my weblog (in dutch). Some years ago I went by bike from Arica (near the border with Peru) down to Puerto Williams, the southernmost village in the world with permanent occupation. Though that partially is because of the naval base there. And recently I went walking in the Torres del Paine (v. flickr).

I still actively queer existing LBGTIs and try to make society a better place for us to live in.
These days I am spend my days being self-employed in gender education and trans/inter rights. See my other site: Vreerwerk. That does not yet really pay off, so I am also still looking for more paid work in LGBT and/or human rights. Know something? Let me know.