So, here we are again. Another demonstration for our right to good health and good health care. This time explicitly aimed at the Nijmegen clinic. We have enough reasons for that. One of the most important in my opinion is that Nijmegen is not as different from the rest of the clinics as they wish or pretend. Does not advocate for radical change as much as I hoped after their initial conference some two years ago. And when I hear the head of the clinic, she is still pretty much stuck in archaic opinions. A good thing, and they may be the first in this in the Netherlands, they are rolling out a gender sensitive patient registration system with room for non-binary options. Still sub-optimal, but a nice leap.
I am vreer and we may have met at the 2021 demo near VU in Amsterdam where I also spoke, or another one at Dam square. I represent Principle 17, a collective of trans health advocates. We took the initiative some five years ago to do research on health care users’ experiences and initiated a petition against the bloody long waiting lists for access to trans health care. I worked on the European and global level on improving the current DSM and ICD standards for trans* people.

Dutch and international standards depathologize those who can legally think for themselves and pathologize those under parental care. They also pathologize feeling not normatively gendered, which is painfully parallel to pathologization of being gay – which was lifted in 1990, only 22 years ago!
That is stimulating a moral panic against the idea that kids can know their gender identity. That is stimulating a moral panic against gender and sexual difference and ends in violence and discrimnation against trans en gender creative people. See the UK for instance where the TERFs would love to see us made illegal. See Belgrade testerday. See the Dutch “gender doubt” campaign by our own TERFs and reactionary Christians. 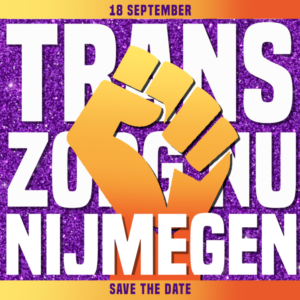 Today I am here to present you an Alternative Vision on Trans Health Care, to give us a better tool for our advocacy. The existing heath care standards here in the Netherlands only have one good aspect: they exist. Further they are pretty much trash. Already outdated when they saw the light. With Principle 17 we did some research on the human rights discourse on health and health care these days and what are good guidelines and best practices internationally.
I want to tell you some highlights from our report – im sorry we haven’t brrn able to ptint it, the library systems ere offline. But you can download it from our website principle17.org, in Dutch by the way – English comes later, as we have limited capacity.

Our report gives actually all the reasons and all the tools to eliminate the years of waiting lists. Apart from the budget needed for it, that is a question of political will, like ending poverty and discrimination anyway.

I want to focus on two issues:
1. health care and marginalised groups within the community, including youth
2. on alternatives

First, As trans* people we are already a marginalised group, and several groups on the right are actively trying to marginalise us even more. Nowadays there is the “gender doubt” campaign that states we are a danger to women. Well, I think we áre a danger to the cis-tem, to the men, to the maintenance of cisgender privilege. The idea that gender is natural flies in their face. And that is what scares the right, another naturalised privilege that goes down the drain. Reason enough to breathe new air in the ages old moral panic “But the children!” Because that is what has been happening over the years: a moral panic that children cannot decide for themselves, that is what causes all the trouble. Take the youth seriously and you can immediately start with blockers and hormones – if that is what they need. Contrary to popular opinion, we don’t force anything upon them.

We see very clearly that those of us who are not white, able-bodied, well educated, not Christian, non neurotypcial, non Dutch speaking are confronted with a huge lack of understanding, incompetence, misinformation, and insufficient knowledge from health care or mental health professionals. This is bigger than just trans* health care, but on these intersections it hurts most. Big parts of our “transition” regime are the consequence of a discriminating cis hetero ablebodied white world.

Second I want to point out some alternatives, that are based on depathologisation. An approach that we are not inherently sick or mad. Apart from being mad for rage about the eternal discrimination. Depathologisation means you go to see someone for your health and get taken seriously immediately. And not only after a psychologist tells health care providers you’re not insane. Like the regular health care user that you are.


Some important overlooked points are that we suffer from being marginalised in society on a daily basis. We’re discriminated against in housing, in school, at work, in public spaces, some of us even at home. As long as we have to struggle for basic needs like adequate housing, good education, proper work, being safe in society, we don’t have equal rights. And then we will continue to suffer, because those basic needs are essential to our survival.

Our colleagues from Trans Zorg NU will present their demands after me and they are very similar to our advice:

We know where to find your board rooms.